What is the best way to create Java strings for better performance? Here are two examples of creating strings in Java:

@ QMechanic73's answer is good, though it raised a question I just researched to understand. Why does a==c and b==c always return false ?

To complement its response, when you create a String with the new operator you are creating an object for this String in heap and when creating the String without new you are looking for a String in pool de Strings , however if you do not have String in% in String is created, regardless of whether or not an String exists in the heap .

Therefore, only when comparing the two Strings created without the pool operator returns true .

A removed example from this site here.

When you do this:

If you have this:

Note that if new and s4 were created before s5 , s1 and s2 the diagram would not change, it would be the same as above.

Answering your question, the best way to create Strings is without the s3 operator, since the chances of reusing String are greater, since every time you String and it already exists, you do not need to create another one.

In the first case it is always the same object being retrieved from the String Constant Pool in the second case, a new object is being created.

You force the creation of a new String object and it consumes a little time and memory.

str will only be created for the first time ( a new object ), and will be cached in #, so each time you refer to it in its literal form, you're getting exactly the same object, which is pretty fast.

How does it work?

The JVM checks the String Constant Pool first, and if the string does not exist, a new String object foo is created and a reference is maintained in the Pool. The str variable also refers to the same object.

To verify this, you can compare two String references using the == (see also How to Compare Strings in Java? ) to verify that two references refer to the same String object in memory.

str3 and str4 are the same object soon, comparison == is true. 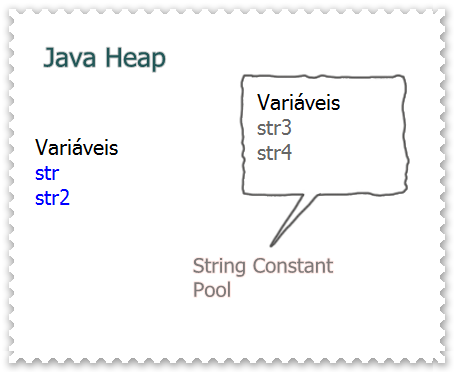