What is the difference between Apache Cordova and Ionic?

I have some questions regarding Apache Cordova and Ionic. Both for me, look the same thing for the same purpose, allow the creation of hybrid applications for mobile devices.

See that on the Ionic site you need to have Cordova installed for Ionic to work. So it is at this point that my doubts arise.

Well, briefly, Cordova is responsible for getting your Javascript code native resources from the device, such as camera, GPS, accelerometer, among others. Already, the Ionic is a framework that takes care of the visual part of the application , how it will be presented to the end user, creating looks very similar to native apps .

As I assume you have read, Ionic is built on Cordova, that is, Apache Cordova is the bottom layer, which takes care of the transformation part of the application in packages for each operating system.

See below for a comparison using the same code, but compiled for IOS and Android. 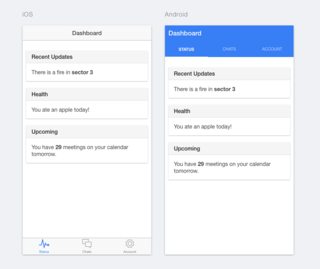 The conclusion is that they are two different, dependent tools, being Cordova a bridge to deal with hardware , functioning as " backend " and Ionic to work in appearance issues for the end user, such as " frontend ".

Ionic is an extension of Cordova using AngularJS , preferring TypeScript than JavaScript. This allows the visual formatting to be much richer and easier (although there are those who disagree it is easier), its focus is the UI trying to abstract the differences of each platform and not to take care of the access to the resources of the device.

There is a recurring and adjoining question about PhoneGap which is Cordova extended by Adobe.

They are not competitors, they are complementary.