I have this code and as you can see I created two examples, Parallel and NotParallel. 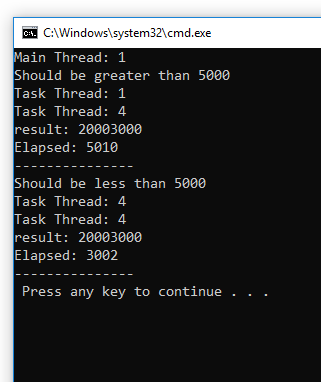 A common mistake is to think that asynchronism is synonymous with parallelism. The use of async is not always well understood either.

Using async , by itself, does not make the method (the code that executes) asynchronous. async only allows the word await to be used.
What allows certain code to be executed asynchronously is the Task.

The combined use of async / await allows Write / Mix Synchronous and Asynchronous Code Shape sequential. Each line of code runs sequentially, when a line with await is encountered the execution of the method is suspended and execution is returned to the calling code. When the asynchronous operation terminates, execution resumes on the next line and proceeds sequentially.

This misunderstanding makes it possible to use async in methods where it is not necessary:

Only need await if, in that method, you need to do something with the result and / or after the asynchronous operation ends. If this is not the case, do not use async , just return to Task.

When you're ready to deal with the result, then yes, use async/await

That said, let's look at each of the methods:

I've simplified the code to try to show that "parallelism" has, in this case, only to do with the moments (instants) in which each call to GetTaskAsync() is made. In this situation ( console application ), only the GetTaskAsync() method needs to be declared async . It is the only one that needs to release the execution to allow it to be called again in the Parallel() method before terminating the previous call.

The sum in NotParalel() is just because you're waiting for one execution to finish and then run the next one and finally return, on account of await .

Now in the parallel, see the difference:

This is precisely why one method is called a parallel and the other is not. This is the difference in execution time between the two and there you will begin to give due importance to parallelism and asynchronous programming to get the best performance in time in your applications.

For a more in-depth look at the subject, you can refer to Microsoft's own recommendations for this type and implementation in C #.

Async Programming with Async and Await (C # and Visual Basic)

20.04.2018 / 17:59
Vector ordering of objects How to create an executable for a python program that installs the used libraries?