Can I store files in an executable?

I need to store a file, no matter its extension (it's mostly an executable) within another executable.

I'm compiling with CodeDom an executable that inside it there is a "special" and encrypted file, while executing the all magic executable is done. But the problem with this magic is the way I'm saving% w of the magic m file inside the x executable.

I want to put the bytes of the m file inside the x file literally.

I did the following in the pre-compiler, I made a static method that already automatically returns the bytes of the m file, but to do this, byte by byte inside the code, I did a huge gambiarra to do that, but it worked. For example, I wrote a Hello World program in C # and got the bytes from this file and compiled it inside another executable, type a file container.

When I decompiled the output executable, I got a huge list of encrypted bytes, and I do not know if this is good practice. Here is the image of how it was: 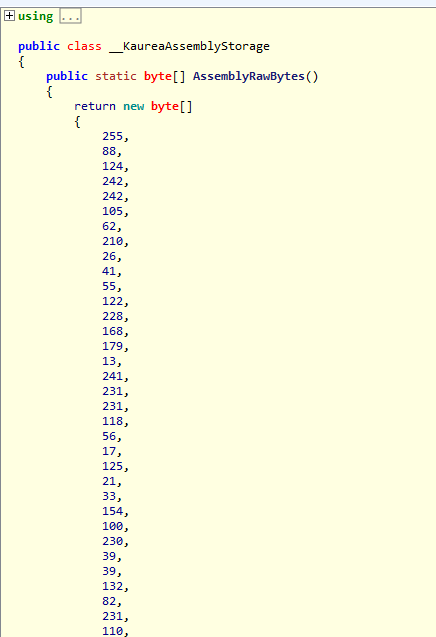 It was a little steady, was not it?

I would like to know if there is any way to implement bytes of a file without using literal values, or not to declare a variable to save huge amounts of bytes, as I did in the example above.

If this is not possible, can these lists have limits on how many bytes I can put in them?

To get an idea, that method returned about 200MB.

What you are trying to do is called "EXE packer". There are many ways to do this.
See this tool: Inject your code to Portable Executable file
These are in C #: friedkiwi / netcrypt
Vitevic Assembly Embedder
How to Write a Simple Packer / Unpacker with a Self-Extractor (SFX)
UPX is a free, portable, extendable, high-performance executable packer for several executable formats. C # Reversing - Unpacking A Packer [Part 2] - Reverse Engineering
As noted, see if this lib helps you:
C # File Resource Management Library