Hello, I imagine that my question is simple but I have not found anything in the forums of life (probably because I do not use the correct terms in the search).

I am creating a form for students in JavaFX generating fxml files with Scene Builder, it is separated in two parts one general data and another for specific. In this case, one part for the student's personal data the other has data about the course of the same. Considering that there are five courses, the fields pertaining to each will be different.

I generated an fxml with the general information fields and left an empty page to embed an fxml for one of the courses.

My goal is to offer a screen to the user with five buttons, one for each course, when he clicks on a complete form is shown.

If anyone knows anything that can help me, please share. Thank you very much.

I'm not with my computer so I'll have to use another example, but the images below explain the situation better.

In this project the user can make a food, animal or miscellaneous complaint, they all share common information that can be observed at the top of the form the image below. 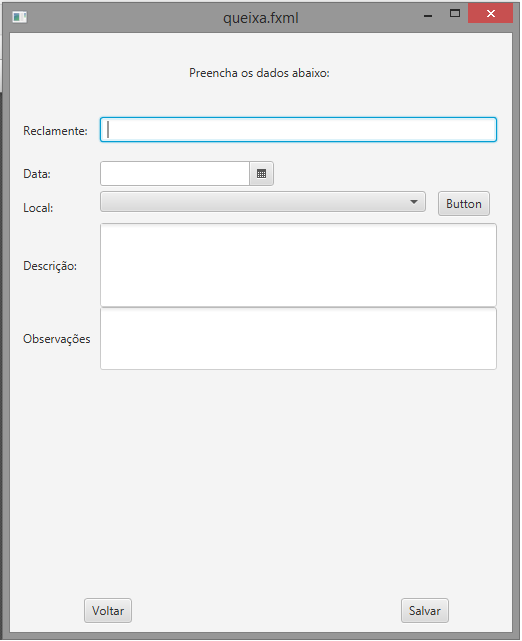 My question is: is there any way to code so that the general data form incorporates a specific data form avoiding to create a complete for each type of complaint, considering that I will have a screen for the user to choose what kind of complaint do?

Well, you need to leave a blank (can be HBox, VBox, Pane etc) empty in the area you are going to add. Then use the following code:

I did not have time to test, but apparently that's the way to do it.

11.05.2016 / 11:48
How to make DbUnit recognize the Postgresql POLYGON data type? How to make multilingual README.md for Github?