Why green = blue + yellow, but in RGB yellow = green and red?

Why does color formation in RGB does not follow the same pattern as nature, and does it work anyway?

The tones are not the same, even because it depends on the amount of yellow or blue, to form the green.

That is, yellow depends on green, and on another green depends on yellow.

NOTE:
I understand that the answers will go to the side of physics and biology. But I've always had this doubt because in addition to working with back-end, I work with front-end, and this occurs to me very often. This is because the RGB system does not "close" much of what we learn from the "art aunt" at school. So do not get too intuitive when it comes to color to draw a page. I'm behind the why of the RGB system being different from the other, and it being the one chosen to be applied to images and application designs. (If I'm not mistaken, it is studied in Image Processing).

The "blue, red, and yellow" "nature pattern" is actually a basis for subtractive primary colors . Subtractive primary colors form other colors through the absorption of light. For example, if you mix yellow and blue inks, we will have a darker green color, correct? This is because the new pigment absorbs both the yellow and blue frequencies - the frequencies left over and reflected reflect the green color. That way, the more paint you mix, the darker the pigment will get, because it will absorb more colors.

Computer screens, however, do not reflect light - instead, they light . In this case, "mixing the pigments" actually means emitting light at various frequencies. This means that the more colors are emitted, the clearer the color (because there will be more light). Of course the combination could not be the same as the subtractive colors - in fact, quite the opposite: to get combinations of 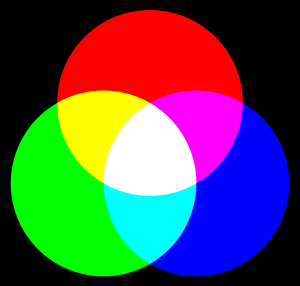 Because RGB is primarily meant to represent colors on monitors, it uses additive primary colors.

Now, it's important to note something important: although they teach it in school, a subtractive color base with red, blue, and yellow is bad because it is not orthogonal. You yourself noticed this by saying that an area painted with yellow and blue "turns green" (or at least something like that). This base is known as RYB and is taught more for historical and perhaps didactic reasons than for being an efficient base.

A much better subtractive primary color base, and the one most commonly used in practice, is yellow, magenta, and cyan (as well as black, not to waste ink). 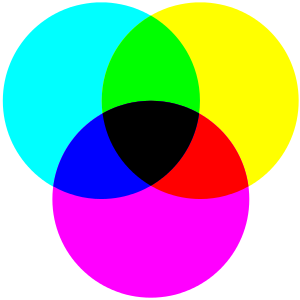 This database is known as CMYK (Cyan, Magenta, Yellow and Key) is extremely important in design and printing. If you look at a printer's ink cartridge, you'll probably see these four colors. (Black goes hand in hand because, although it can be compounded in theory with other colors, it is a widely used one and compensates for being tossed aside, as well as making it easier for other tones to darken. printer uses.) 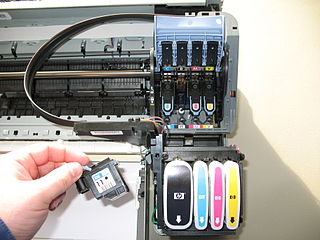 This post is a fascinating exploration of this theme (and my main source : P)

Basically because they are different color systems, additive (RGB) and subtractives (CMYK) .

Used on monitors, it is generated by mixing various greetings from light waves. In the additive process black is generated by the absence of color and white is the mixture of all of them.

The RGB component generates the color according to the amount of red, green and blue light, ranging from 0 to 255. When the total value of all colors is added, that is% cos_de% is generated white, and when there is no lu, in the case RGB(255,255,255) forms the black color. 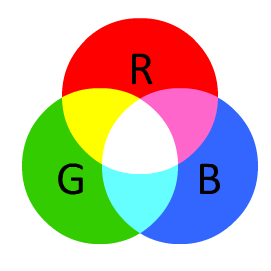