What can I do in .Net Framework and .Net Core? And vice versa

I grew my eye on .Net Core (ASP.Net Core), I started with C #, but I left by going to the "open-source" side, now with this opportunity I decided to go back ".

I intend to use .Net Core (ASP.Net Core) in a personal project and in the future to establish it as a development option.

In research I have seen that there is a lot of talk that there are "constraints" between the two sides, and this is crucial in deciding if it is right for a project:

There is a page indicating what the new .Net proposal is. Platform Standard . That may be the most important. If you want something portable among the various implementations that conform to this you have to stick to it. Whatever you use and is not on this list, there are no guarantees that will work in other implementations.

Compare with ASP.Net 1.0 is not wise.

The two main advantages of .Net Core is that it runs on a variety of platforms (not just operating systems, it's actually a more open technology) and does not need anything previously installed, even allowing a modular installation of the dependencies. There are several other advantages. In addition to having new features, more modern, and better thought.

It would be complicated to make a complete list of what does not exist in. Net Core because this list is very extensive if it is in detail and it is shortening every day.

I will not even mention the differences to develop it. That's a way.

Almost everything they took was for good reason.

Far from saying that .Net Core will have everything the .Net Framework (the old one we always use). Explicitly this will not happen. But much of what does not exist today must have at some point.

What you can say is that a lot of things connected to Windows will not. As Core was made to be portable, these things were left out.

Finally, think of .Net Core as a new technology. There are cases to continue using the traditional framework . In general it is not worth converting old applications to .Net Core, unless you have a good reason. But in most cases it is interesting to use .Net Core. It is game changing for .Net.

Responding to what is best for each project is not your job. There are more specific questions about features you'll need.

A lot of people think it is worth investing in it, in fact I have never seen a new technology have adopted as fast as this, but you should form your own opinion. Certainly there are people who think otherwise.

Just starting to do to know. Remember that everything is different. You still do not know how to use it. You will have initial difficulties. He has a different philosophy and is a little grosser. I think you're thinking right. Take one step at a time.

The .Net Framework will remain supported and will have some progress, but the focus is on .Net Core.

To get the answer and understanding of this question, first you have to look at the image below that exemplifies the current status of the .NET platform: 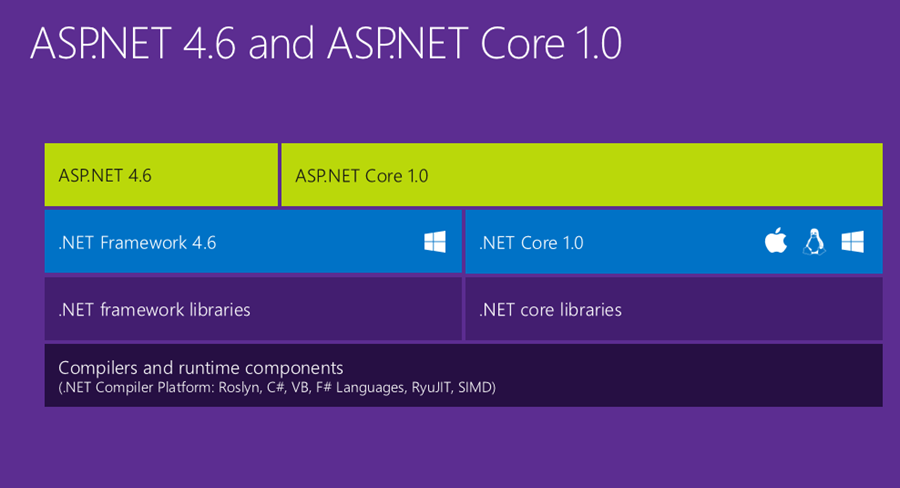 TherearetwoFrameworks.Being.NETFramework4.6themostmature,byhavingyearsofdevelopmentandproduction.This,dubbedby"Full Framework" , is only available for Windows applications. That is, applications that run on Windows Server, depend on IIS and the components that are installed there and depend on this universe. For Full Framework we can only work with ASP.NET 4.6. And so, utilize the full capabilities of ASP.NET 4.6.

The second framework, called .NET Core , which is currently in version 1.1, is available for Windows, Linux and OSX environments. That is, it is what we call cross-platform or multi-platform. For now applications developed with .NET Core compared to Full Framework are more limited in feature. However, already in 1.1 version of .NET Core we have a certain stability and several interesting functionalities and that brings us independence of server, environment and development platform.

Important : .NET Core applications can run in environments with .NET Core or .NET Framework 4.6 installed. But the opposite is not possible.

Another detail: You can develop an application in ASP.NET Core 1.1   and use .NET Standard libraries. However, in doing so, your   application is no longer cross-platform.

Do you have a great deal of difference between the two?

The .NET Core has been rewritten. For anyone who was accustomed to Visual Studio to do everything, it may not take full advantage of .NET Core. I think independence in manipulating the development environment is one of the biggest differences. Programmatically, there are no major difficulties.

Is it worth investing in it right now?