What is the purpose of @Override?

I have some doubts about @override , I read somewhere and I vaguely remember the rewriting issue, but what is it? And what's the use? As it applies to a JAVA code. Is there any other language?

It is a way to ensure that you are overwriting a method and not creating a new one.

Let's say you created a class with a print method:

So you've made a class that extends this class, and you want to change what will be printed when the method is called:

You have correctly overridden the imprime() method and the above code will work without any major issues.

One fine day, however, you decided to rename the method in SuperClass from imprime() to imprimir() :

If you do not remember the class that extended the SuperClasse you will have a imprime() method in it that is not overwriting the method in SuperClasse . You are actually calling a new method, which is called imprime() .

What would happen if you had used the annotation @Override?

This would be your code at first for both classes:

So far, nothing new. However when you change your method from imprime() to imprimir() you will no longer be able to compile your code because @Override will notice that you are not overwriting anything since there is no more imprime() method in SuperClasse. >

You will receive the following error:

MyClass should override or implement a supertype method

MyClass should overwrite or implement a method of its superclass

Every object-oriented language allows superclass methods to be overridden by the child class. However, each programming language uses its own means to deal with this overwriting. Java has chosen to use the annotation @Override for developers who want the security mentioned in the course of the response, however, nothing obliges the use of this annotation.

C # also has such functionality, however it does not use annotation, it incorporates the reserved word override in the method declaration:

It is impossible to list all programming languages that use override because believe it or not, there are thousands (literally!) of languages out there. If you want a slightly more complete list see: Wikipedia - Method overriding

What is Override in Object Oriented Programming?

Does it exist in other languages?

In Object Oriented languages, this is a trivial factor, there are perhaps things that change in the way it is implemented. 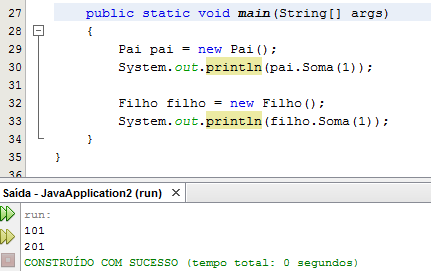 Overriding a method occurs when a child class implements a method that already exists in a parent class by overwriting existing behavior.

In the example above, class Gatinho inherits class Gato , but changes the behavior of falar() method.

If we call the methods polymorphically, the result is different. Example:

The result will be:

Specifically in the Java language, there is the Object class that is the parent of all other classes. This means that, even though it does not have a extends in the declaration, every class has an implicit inheritance.

The Object class has some special methods. One of them is toString() , used to "represent" an object in the form of String . In this case, we could overwrite the method even without having an explicit inheritance.

There is a detail of method overriding that was not mentioned and often causes problems: To override a method, you must keep the same signature .

What is a signature in the Java language? It is the composition of the elements that declare the method.

Now consider the elements that are part of a method declaration:

Specifically in Java, method overriding occurs if at least the name and type of the parameters are the same.

The following example describes a method overload ) and not an override:

In the above class, considering the first example, the method falar(String) is is overwriting the falar() method of class Gato , because the signature is different.

Another feature of the Java language is that it is case-sensitive ( case sensitive ). This can lead to misconceptions, as the following example:

Note that s is lowercase in tostring . This causes the above method not to be called as expected!

Then came the annotation @Override . It simply informs the compiler that intent would overwrite.

In this way, the compiler can evaluate whether the signature is consistent with some superclass method and issues a warning if the method is not actually overwriting something!

So, in the example of tostring lowercase, it would be clear to the developer that there was some misunderstanding.

In addition, it is common when a system's code is modified or libraries are updated, methods that the overwritten developer will simply fail to be called without warning. This is because a method of an overwritten class has been changed or removed. With the @Override annotation, you'll be safer to make that kind of change and be able to track the code points that need attention.

Overwriting methods is part of the object orientation that I will not go into detail, since the question is annotated.

The annotation basically serves to "warn" the compiler that that method is overriding a superclass method from which it extends.